Well opening weekend has come and gone and things were really slow.  I had a friend of mine and his daughter come down from Crawfordsville, IN and hunted with me Greg has a young Brit named Ben.  We started across the road from house and Gem pointed a pair of woodcock and no shots were offered.  Ben later bumped another woodcock again no shots.  We never did find the quail, after a great lunch from Tina Hillary took the afternoon off and Greg and I hunted another piece of property that held a large covey last year but when only found one small covey with 7 or 8 birds Greg took on bird and we decided to call it a day.  My dog Jet pointed the covey and I had a nice back from Ammo.  Didn't get to hunt Saturday as my son and his family came up from Evansville for a visit.  I went out Sunday with Kate, Morgan and Patch ran along for the experience.  I did not take a gun as Patch has never been properly been introduced to the guns yet.  I just wanted the other 2 dogs to get some time in the field in.  I put tape over the beeper collar and put it on Patch so I could start conditioning her to the beeper.  She did great after about half hour I put a slit in the tape to rasie the volume and she never even blinked by the end or the trip I had taken the tape off and it was running full volume and she never even noticed.  We never found any birds but the dogs had a great romp and Patch got some time in the briars and sticks and she did really well.  I have attached some pictures of Gem on point on the woodcock and Jet on the small covey of quail and one of Patch running in the field.
If you want to see the full allbums click on the link below to my Facebook account. 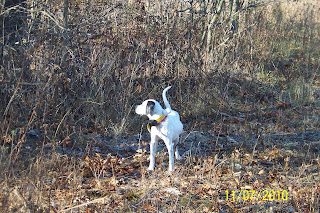 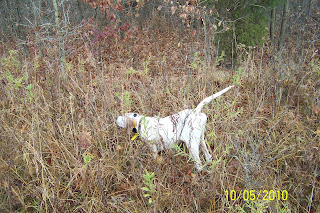 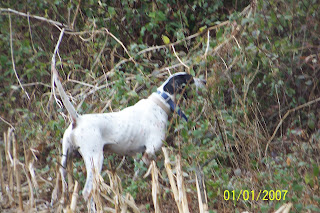 Posted by Pointerman at 9:35 AM