Another Hot and dry day up to 80 degrees and no breeze and the hunting is tough on me and the dogs and it is so dry the scenting conditions are very poor.  I went to a friend of mine, Jason Hedricks, house and hunted the farms around his house which is located in Alfordsville.  I hunted Gem and Birdie and it was really hard on Gem hunted him a little longer and further than I aimed to.  We moved on nice covey of birds and Jason got one bird on the rise and of course I missed both my shots.  Then we moved on to the singles Jason picked up one bird and I got a single.  Jason's dog, Duke, had a couple of nice points and Birdie and Gem did OK.  In the picture Duke and Birdie pointed at the same time and Gem with the back. 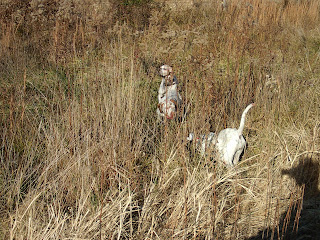 I also took Patch with me.  Jason has a nice 2 acre training ground and birds in a Johnny box.  We turned about 6 or 8 birds out and I let patch go.  The training ground is really thick and it was so hot Patch never pointed but she flushed a bird and off she went.  I don't mind her chasing it helps build desire in a pup that age, she is 4 1/2 months now.  I then turned Gem loose to see if he could find the birds but he was just worn out but Patch had a good time got to run thru the cover and chase it was good for her.  I also continued to let her wear the beeper and she did just fine with it will probably get out some pigeons this week and let see how she does on the them.  I have also put in an order for some pen raised quail that should speed things up a little.  Here are a couple pictures of Patch. 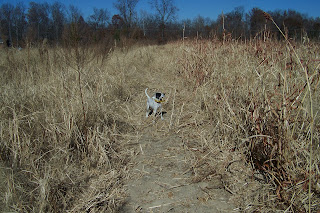 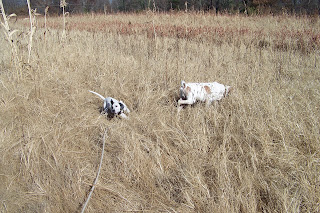 Posted by Pointerman at 7:12 AM