Went Fishing last night after work and the fishing was tough steady 20 MPH winds and gust much higher but at about 6:30 the wind laid and we caught 3 fish in the span of about 5 minutes and then they just shut off again.  My fish weighed 3 lbs 13 oz and I caught it on a Manns 1 Minus  colored green and white.  Scott Williams who was fishing with me caught 2 fish the first weighed 5 lbs 8 oz and the second was 4 lbs 5 oz and he was also using a Manns 1 Minus but in silver and black.  This was my last fishing trip of the year.
Bird hunting season is just 8 days away and I will be spending all my time hunting and working the dogs.  I am going on a preserve hunt this Sautrday with a bunch of guys from here at work.  I am really looking forward to it should be a blast.  Hopefully I will have some pictures when I post about the hunt. 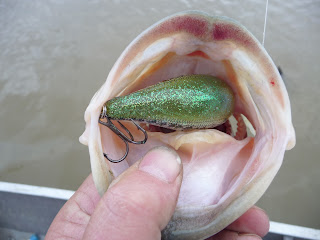 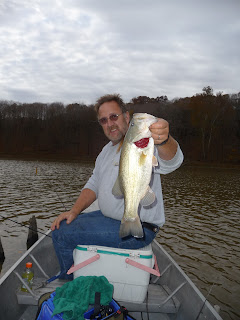 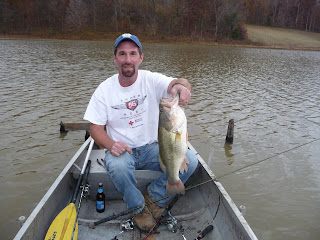 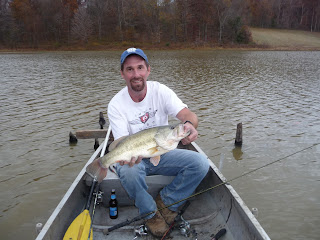 Posted by Pointerman at 7:43 AM No comments:

Had a pretty good weekend, went to Bardstown KY and visited my daughter her husband and my 2 grandkids.  Made the trip to pick of my 95 tracker which had some mechanical problems.  Had a since visit Sara made a wonderful lunch of Roast, Steamed Veggies and pasta it was delicious.  Dropped by the new Bass Pro in Clarksville on the way home and bought a few new fishing lures, going to try to go fishing one more time this week.
Spent Sunday working on the Geo got part of the problems fixed but it took some good redneck engineering but I did get the fuel leak fixed and put the battery on the charger and got it fully charged.  Still need to buy a new fuel filler neck the one in it rusted and when you put fuel in it most goes out on the ground.  Been looking on line and found a new one but still looking for a used one.
Stormed about 4 AM this morning and it was a welcome sight and sound we got about .4 inches and we are expected to get more in the next couple of days.
Didn't mess with the pup any this weekend.  I fixed one of my kennels and I am planning on moving her closer to the house so when I go out I can spend more time with her.  She is doing well with NO and here plan on putting on her first birds this coming weekend.
Posted by Pointerman at 6:04 AM 1 comment: 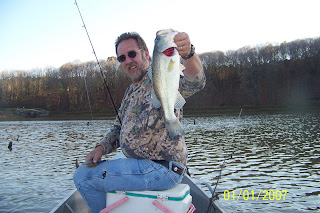 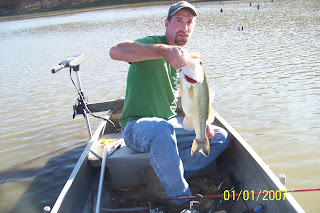 Went fishing yesterday evening on a small water shed lake called seed tick.  With the on going drought the water level was really low and the lake really shallow.  And the bass were stacked one on top of the other.  I only caught one fish is was 2 lbs 13 oz but what a catch it was, I was fishing with a jitterbug top water lure and when the bass hit it it was awesome.  I tried a lot of different lures including spinner baits of various colors, crank baits, buzz baits and the jitterbug but only caught the one fish but had another vicious strike that I missed.  My friend Scott had alot better luck he was fishing a 5/8 oz minus one crank bait and he caught ten bass nothing less than 2 lbs but a couple over 3, one over 4 and the one pictured above is a 6 lb 4 oz hog.  We are planning another outing next week while the weather holds and before bird hunting season comes in.  You bet I will be looking for a black and silver minus one before the next trip.
Posted by Pointerman at 9:24 AM No comments:

Well had a great weekend the weather was great (even though we need rain bad).  Got all my summer stuff put in the shed and mowed the dust and the leaves looks pretty bare around the kennels with all the lawn furniture and pool gone.
Worked with Patch a little, boy is she a hellion.  Once she gets run down a little she does pretty good.  We worked on NO which is an on going process but she does know what it means you tell her NO and she quits what she is doing.  Also worked on here and she is doing quite well with that.  Got out a pheasant wing and played fetch and worked on here at the same time she had great fun and did real well brought it back when she was called but did not bring it back on her own yet.
Flew 3 pigeons on Saturday and as of yesterday 2 have come back so I now have homers to work Patch with.
Hunting season here is Indiana is just around the corner already have hunt planned for opening day and I am guiding a hunt at a preserve on Saturday the 30th so I am getting pretty pumped up.
Posted by Pointerman at 7:04 AM No comments:

Not much going on right now I did move Patch from the puppy pen to a big kennel last night she seemed to enjoy it, she has alot more room to roam and a nice cozy dog house.  We have been doing some yard work been working on come, sit and stay.  I know some people don't believe you should teach a pointing dog to sit because it has a tendency to make them want to sit on whoa and on point but I am going to give Patch a chance and see how it works I am sure it would come in handy sometime.  No big plans for the weekend I am planning on getting the rest of the yard furniture and summer stuff put away for the winter and I would like to mow, not much grass left but the leaves need mulched.  Want to get all this stuff done as bird season is just around the corner and I don't want any yard chores getting in my way of hunting.
Posted by Pointerman at 6:16 AM No comments:

Well made in to Michigan and back had a real good time beautiful campsite right on the shore of the AuSable lake in Glennie Michigan.  Had beautiful weather lows in the lower 40's and highs in the upper 60's and lower 70's.  The hunting was tough we saw a ton of birds maybe 50 or 60 grouse and about the same amount of woodcock but the shooting was tough no grouse and 3 woodcock apiece.  Had some really good dog work 6 to 10 points a day but those wiley grouse would get up and walk away from a point and then flush 30 to 40 yard out in front.  Now the bad news I thought may camera was in the video bag and it was not so I did not get one single picture and we had some really beautiful points.  Here is a list of the dogs I took Patch, Gem, Herkie, Ammo, Jet, Birdie and of course Elmer the gentleman I hunted with took a Brit and a Setter.  We had great work from all of them.
Patch didn't hunt but she had a blast around the camp site and she learned alot being around people and the other dogs in an outdoor situation.  She got out and about but I never took her out in the woods it is really thick up there and I didn't want to take a chance of losing her.  I hunted Gem 2 times even though he is supposed to be retired I just couldn't keep him from doing what he loves.  He did fine even though he tired quickly.
Tina and I are wore out 11 hour drive one way and 3 days of hard hunting finally got the best of me was really glad when we pulled in Monday night about 8:00
If any one would get a chance to hunt up there I would highly recommend it great habitat as far as the eye could see and just acre after acre of public ground all which hold birds just pick you up a map from the michigan DNR and have at it.
Posted by Pointerman at 7:36 AM No comments:

Well I have been finalizing for our trip to Michigan for a little grouse and woodcock action.  I am really pumped.  Camper pretty well packed and should finish up tonight and head out in the morning.  Taking 5 dogs, Ammo, Herkie, Jet, birdie and Patch.  Of course Gem and Elmer are going they go anywhere we go.  Don't plan on hunting patch she is a little too young but the experience should be great I will probably take her out on a couple of short runs and hope she finds and flushes a bird or 2 it would be nice to see how she handles herself I would let her knock and chase if that occasion occurred.  I will update next week hopefully with some good stories and some pictures so stay tuned.
Posted by Pointerman at 4:30 AM No comments:

Finally got a 1/4" of rain Saturday was a nice relief but we need alot more than that to get us back to normal.  Didn't do any dog work this weekend but continued to get things ready for our trip to Michigan.  Plan on taking the camera and video cmaera to Michigan so I hope to have some pictures and videos of the dogs and the hunt.  Really looking forward to going not looking forward to the drive though.
Posted by Pointerman at 5:42 AM No comments:

50 days now without a drop of rain really dry and dusty and the pollen is really bad.  Took Ammo out and put out a couple of pigeons he ran right by them.  I think it is so dry that the scenting conditions are horrible so let's pray for rain.  Still getting things together for our trip to Michigan didn't work with Patch any I just the little hellion run for a while may is she full of energy.  Hope everyone has a great a weekend.
Posted by Pointerman at 5:46 AM No comments: