My grandson, Payton, is a Tiger Scout which is the first rand of the Cub Scouts.  they had a fund raiser selling popcorn and he sold over $1000 worth of popcorn.  This won him a trip to the Old Ben Scout Reservation for an outdoorsman day.  I got go with him and I also took my stepson Justin D.  My son is also named Justin and he also went.  We made a day out of it.  They had outdoor activities planned for the day we started and the archery range and Payton did real well for a 6 year old.  We then moved on to the confidence course and Payton got to play some games and got a chance to climb the rock wall he made it to the top and I was so proud of him.  We then went to the gun range where they all got shoot the BB guns Payton did well but had problems aiming I think he is right handed but is left eye dominant he kept trying aim over the gun with his left eye.  Justin will have to work on that.  We then went to lunch and they had a nice lunch served up by the older scouts.  We had sloppy Joes, tomato soup, chips and cookies.  We all ate well.  During lunch they had a door prize drawing and Payton won a lego race car set he was so happy.  After lunch we went to the chapel and listened to a talk about "leave no trace" while you are in the outdoors it was a good talk but I don't know how much the youngers ones understood.  After that they had a scavenger hunt and Payton found all the answers but 2 so he did real well.  After that it was to the lake and fishing.  They had a pro fisherman, Chad Morganthaler, he had his big boat with him and talked to the kids about fishing.  then we went to the lake and then if started raining.  I took Payton on a row boat ride and we went up and down the lake a couple of times and then we went fishing Justin, Justin D and Payton all fished but I watched helped we didn't catch anything but the lake was real low and with over 500 people fishing at one time or another thru the day I was not suprized.  It continued to rain and we decided to call it a day.  But all and all even with the rain it was a great day got to have a guys day out with my 2 Justins and my grandson.  If you want to see the whole photo albums follow the link below to my facebook photo album..
http://www.facebook.com/album.php?aid=33389&id=100001292875644&l=903b006fac 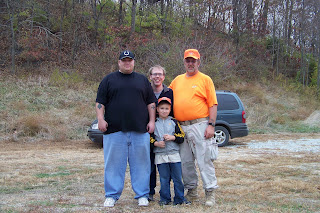 Posted by Pointerman at 7:58 AM