Well it has been a while since I have updated my blog and boy what a busy week it has been. Got up Saturday morning to beautiful weather so I decided to run my 3 new dogs. I just cut them loose and we went across the road to an area where I always run my dogs and I have been reading on some of the Indiana forums that the woodcock were migrating back north and I have moved several woodcock in this area and I thought it was worth a try. Just got in the field and I walked up a woodcock and my young male, Rowdy, stopped to flush which made me very happy he was quite stylish. then about 5 minutes later Rowdy's beeper went off and then Savannah's beeper went off I walked up and Rowdy was on point and Savannah was honoring it was nice to see. I moved in and flushed another woodcock and both dogs stood to flush. Here is a picture not great a quality photo but the best I could get at the time.

Spent the rest of Saturday working on my boat and getting it ready for the spring fishing season. I put in 2 swivel seats and I am wiring in a foot switch on my trolling motor. It is looking good and can't wait for warm weather to return.
Sunday went to walmart and Home Depot to get a few things but the main thing was a new crate so I could ship Waldo Monday morning spent the rest of the day watching NCAA and NASCAR but did get a little work done on the boat and took care of a few things around the kennels.
Then came Monday what a day it was. Tina's son called Sunday night saying they were going to induce labor on his wife Stacey so they would call us when things started happening. Well I had an appointment already made at Delta airlines and another appointment to get new teeth in Franklin. Got up at 2:00 AM left for the airport at 3:00 AM. Waldo had to be at the cargo terminal at 6:00 AM. I arrived at the airport a little after 5 and thought I was doing great went to the terminal I have always shipped from and Delta had moved now at 5 AM there was not anyone around to get directions from so I wandered around the airport for an hour and finally called and got Tina up and had her call Delta for directions and she called back and I finally found the terminal and got there at 6:20 which was 20 minutes late but they took Waldo anyhow which I was grateful for. I left there for Franklin and Tina called saying she was on her way to the hospital. Went to my first appoint at 7:30 they took impressions and started the process for my new teeth. Went back at 10:30 for the initial fitting and back at 2:30 to get my dentures. in the mean time Tina called and 12:07 Cameron Scott Metz was born he weighed 7 lb 5 oz and was 22 inches long he is quite the handsome fellow my 7th grand kid. 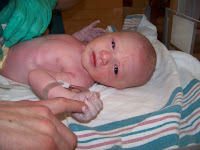 Found out at the dentist that they need to remove some boney structure from my lower jaw which they will do Wednesday March 20. After that heals I will be getting my implants sometime in May. My new teeth fit nice but I will be ready to get the implants and I won't have to worry about them anymore. Got home Monday night a little after 7:00 PM so from 2 AM to 7 PM was a long day.
Talked to gentleman moving from Evansville to Shoals and he had a female out of Miller bloodlines that was in heat and wanted her bred so he brought over Wednesday night and we bred her to Herkie and he left her at our house and I will breed her again Friday and he will pick her up then. I got pick of the litter for stud fee so it looks like I will have another dog on the market sometime around July.
I have rattled on long enough I won't put any training tips on this post maybe next week. Hope you all have a good weekend I am going on a preserve hunt Saturday so I will cover this next week with lotsa pictures I hope.
God Bless
Jim
Posted by Pointerman at 7:35 AM