I just wanted to give you all who follow along an update on my #1 dog Gem. As you know Gem has cardiomyopathy and right sided heart failure. He was diagnosed in August at Purdue by canine cardiac specialist Dr. Magee. He was doing OK until around Christmas and then he started filling with fluid we had him tapped and they drew 10 1/2 cups of fluid from him them 2 weeks later, tapped again and 7 1/2 cups this time and then 2 weeks later another 9 1/2 cups. So I talked to a friend of mine who has bought puppies from me and she is also a Vet her name is Dr. Christina Barcus. She suggested another drug. I called my Vet and suggest this, my Vets called Dr. Magee at Purdue and they did a consultation over the phone and changed Gems drugs around they started him on the pill Christina suggested and upped the dosage on his canine cardio medicine in fact they doubled it. Well since then we have not had Gem back to have him tapped and today it has been 6 weeks and at this time he is not filling with any fluid. I am so happy even though he is officially retired I am just glad to have him around he is my couch potato buddy.
Here are a couple of picture one of Gem taken last Saturday (3-12-11) and the other is the offical last point on wild birds this was taken during a pheasant hunt in Benten county IN in Dec.
Hope you all have a good weekend and I am going to work on my next training tip over the weekend if I can get Tina to take some pictures.
God Bless
Jim 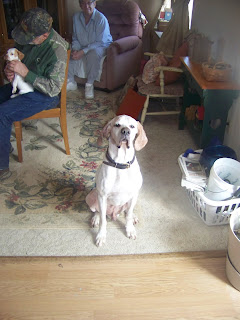 Posted by Pointerman at 5:36 AM