Busy weekend at the kennels. Rosemary and Stephen Prichard drove in from Ohio and brought their pointer Katie to have a little surgery which I will cover in another blog later this week. It was nice to visit with them and when we met them at the hotel Friday morning to take their dog to our vet they were nice enough to pick us up at the tire shop so we could get new tires on suburban. We went to Shoney's for breakfast and the Prichards were kind enough to buy us breakfast. We then went back to the house and visited and spent time talking about dogs. they picked up Katie at 4:00 PM and she was doing great. It was really nice to see and have a chance to visit.
Saturday was puppy pick up day and Joe and Esther Pitts stopped by and picked up Miss Maggie from Missy and Jet's litter. They were really nice folks and Joe was quite knowledgeable when it comes to pointers. They brought their other 2 pointers, Rocky and Gilbert, with them so we were in pointer heaven. Later in the day the Summerfields from New Salem, IL to pick the other puppy from Missy's litter. Their new puppy is named Maggie. They have 2 young ladies who really loved the puppies. I have posted puppy pick up pictures below.
Sunday the weather was nice so I go a few things done around the kennels. got my little Geo Tracker back on the road, new brakes and calipers and new belts and we are back on the road. got the Geo out of the garage and pulled in the boat and started getting ready for some early spring fishing. I am goning to mount new seats, and a new battery box. I also got the grill out of the garage and back on the deck and Tina whipped up us a couple of steaks and baked patatoes. They were great.
I will not be posting any training tips this week instead I am going to post a blog about dog health I will be doing this later this week so make sure you tune in and ready an few words about cherry eye. 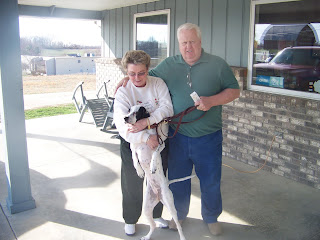 Stephen and Rosemary Prichard with Kate 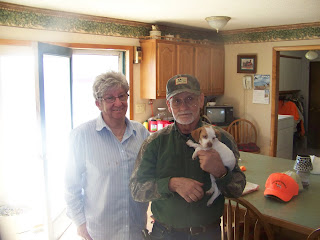 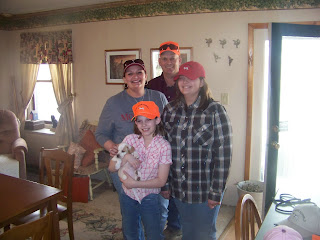 The Suumerfields, Cheyenne, Savannah, Lise and John from West Salem, IL
Posted by Pointerman at 5:24 AM